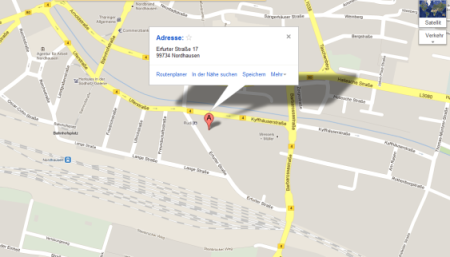 How to find us

To get to our apartment, you have several options:

By train
The train station Nordhausen ﻿is within walking distance about 10 -15 minutes.
Nordhausen is served by various RB and RE lines of Deutsche Bahn. You can reach us from Halle (Saale), Kassel and Erfurt or Northeim. A route map is available here﻿.

For more information about your travel options and times, please refer directly to the Deutsche Bahn.

From the eastern (Halle) and western (Göttingen) directions, Nordhausen has several junctions on the A38. Take exit No. 11 "Nordhausen". About the B4 you get after you have passed Sundhausen on the road Helmestr. Stay on this road. About 2 km after the village sign "Nordhausen", you will see, behind an underpass, on the left hand side the Erfurter Straße. The guest apartment is located almost at the end of the road on the right hand side.

From the north (Magdeburg), you can reach us via the B81 or B4 from Bad Harzburg. From the south (Erfurt) you can also take B4 to Nordhausen.

Parking is free of charge and located directly onsite.﻿

How to travel in Nordhausen

In Nordhausen, you have several ways to get around, whether by car, on foot or by public transport.

At Bahnhofsplatz, there are various bus services available along with two of the three tram lines, wich connect to Nordhausen. To the west, about 8 minutes by foot, you will find the stop Barbarossastraße. A rout map of the city Nordhausen can be found here. For more information about prices and times please refer to the sides of Nordhausen traffic operations.

With the tram line 10 you also have the opportunity to reach Ilfeld.

And also we would like to recommend you the Harzquerbahn, which also starts its journey at the Bahnhofsplatz. It is part of a composite system of the Harzer Schmalspurbahn (HSB).