Nordhausen - Entry to the Harz mountains

We welcome you to our beautiful city of Nordhausen - a town of about 45,000 inhabitants situated in the heart of the "Goldene Aue" in northern Thuringia and in the southern foothills of the Harz. The city is situated 185m above sea level and covers an area of ​​105.27 km ² which is splits to 12 districts.

Nordhausen was first mentioned in year 927 A.D. However, traces of settlement show that the first settlements took place in the year 785 A.D. in the area of "Frauenberg". Some older tracks date back to the year 650 A.D.

To learn more about the past and the second world war here in Nordhausen you have to visit the "Mittelbau Dora" which was famous for production of the V2 weapon during the time of the Third Reich. The underground facilities can be visited on guided tours.

The river Zorge ﻿crosses the city before it flows into the Helme trough Unstrut and Saale ending in the Elbe. In addition, small lakes, rivers and water bodies can be discovered here also. And also the "Kiesschacht" or the "Grundloses Loch" in the district Salza its worth to have a trip there. 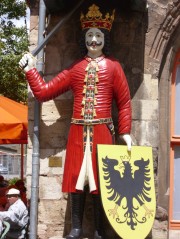 The landmark of the city is the Roland, which you can visit at the Town Hall. But at the Kunsthaus Meyenburg, the municipal mseum, you can discover rotating interesting exhibitions.

Not far away from this, there is the Altstadt (Old City) of Nordhausen which is very attractive with its many churches, the cathedral Zum Heiligen Kreuz or little shops. The Altstadt is also an ideal starting point to visit the Tabakspeicher﻿ museum.

Nordhausen is also known for the production of Nordhäuser Doppelkorn, the University of Applied Sience and the Landesgartenschau, which took place here in 2004.﻿﻿

Nordhausen is not without reason called the city at the Harz. From here, you have excellent opportunities to explore the Mittelgebierge. Whether you are hike along the route of the former death marches, or with the "Harzer Schmalspurbahn" (HSB) which takes you to the Brocken or in the town of Wernigerode, you are guaranteed to have a great time. Our guest house is located just a 10 minute walk from the stop of the HSB, making it an ideal base for exploring.

But even in the night you can discover the city of Nordhausen. The district of Salza has the most widely known night club "Alte Weberei". But since some years its called Sax - Club - Zone. Something even more central is the "Jugendclubhaus". Its just some steps away from the theater and the cinema. And last but not least you also have to visit the Grimmelallee with its various clubs and bars like the Schabernack, the Destille or the Logo. They have a very nice atmosphere﻿, so you can spend a lot of time here and enjoy yourself.

In the guest house you can find brochures, maps and more information to make your stay with us more enjoyable.

If you would like information on attractions and events, select the left option "discover Nordhausen".

Find out more about Nordhausen, its history and its heritage in the pages of wikipedia or city of Nordhausen. Current events can be foun her New Nordhäuser newspaper.﻿﻿